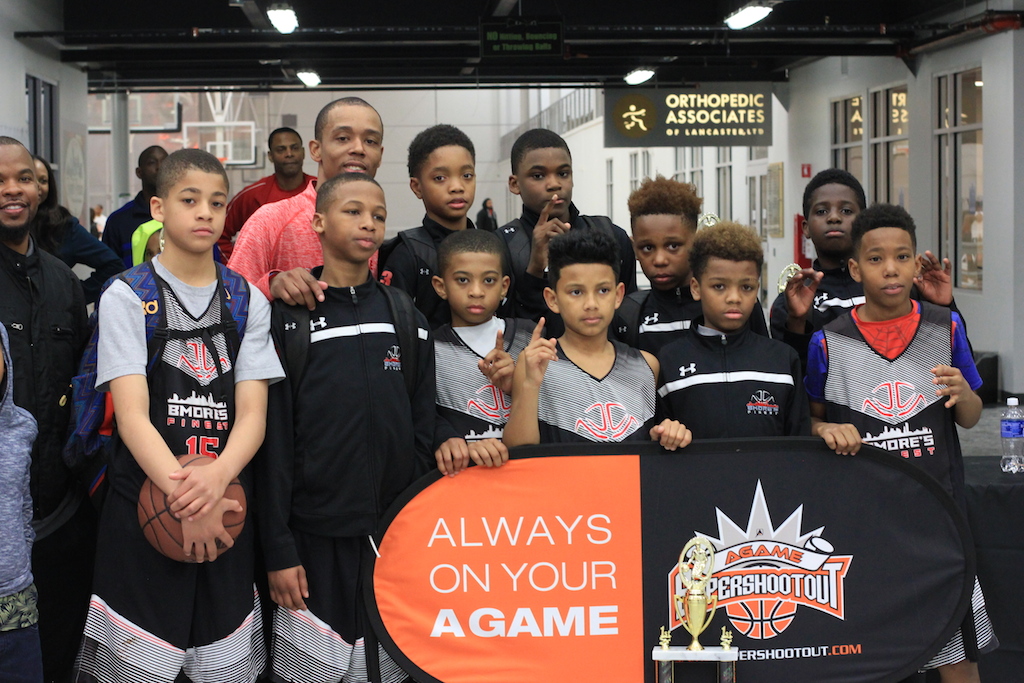 BMoore Finest (Baltimore) and their 11U team battled to the end of the AGame Super Shootout tournament where they faced a Northern New Jersey squad, 60 Elite. The game came down to the last minutes in overtime to determine a victor- making it one of the most exciting games of the weekend.

Both BMore’s Finest and 60 Elite went undefeated throughout the two-day tournament. Although BMore’s  Finest had a small height advantage over 60 Elite, the skills, speed, patience and discipline were equally matched throughout the game. Finest came out stronger in the beginning of the game and collectively implemented a sound motion offense getting good looks at the basket. Strong defensive rebounding allowed BMore’s  Finest many transition opportunities on which they converted on most.

60 Elite initially struggled getting things going on the offensive end. Outside a drive and foul shot made by Corey Floyd, they couldn’t seem to get shots to fall. Their shot selection was impulsive, leading them to missed attempts at the basket and placed their team in a rebounding disadvantage, as they were unprepared. Their performance on defense was consistent for the most part; however they could not contain the hot hand of BMore’s  Finest guard John Lamonthe who hit eight of the fourteen points in the first half. At the end of the first half, BMore’s Finest was up 14-3.

The second half began with a hopeful group of spectators cheering on 60 Elite. The cheering didn’t seem to faze Lamonthe as he continued to dominate the court adding several baskets driving the paint and drawing fouls. Jorace Walker, a forward for BMore’s Finest was the tallest boy on the floor and maintained his presence as a dominant rebounder and passer from the post.

Though 60 Elite seemed deflated, Corey Floyd, forward for Elite played an excellent inside game. Guards, Mason Piorkowski and Nicholas Koch became more energetic and fed off the intensity of the crowd to begin what would be a much-needed offensive streak for 60 Elite. Floyd converted on six points within the first five minutes of the second half. The team seemed to gain momentum on offense and defense. They also limited the number of inside shots made by BMore’s  Lamonthe and forced them to shoot from the perimeter. This strategy slowly brought 60 Elite back into the game.

After Floyd took a charge at around the nine-minute mark, the players and spectators for 60 Elite were full of energy and excitement. The score at 9:26 was 16-18, BMore’s Finest.  Although BMore’s  Finest was still up by 2, 60 Elite held them to five points while on their 13-point streak. Coach Kyle Duffy for BMore’s Finest called a timeout to regroup his team. Coach Mercedez Walker of 60 Elite used the time wisely as well and implemented a full court press. With the energy and intensity accumulated during their streak, the senses of all 60 Elite’s players was heightened.

On BMore’s first inbound play following the timeout, Piorkowski grabbed a steal and made a quick bounce pass to Floyd for an easy two. The second inbound play went similarly. Koch stole the ball before half court and dished it off to Piorkowski who nailed a 3. The crowd and the players went wild. Another timeout was called by BMore’s Finest.

The score was close at 29-22, led by 60 Elite with 4:19 left in the game. After the timeout, BMore’s Finest effectively beat 60 Elite’s press. Lamonthe drove easily through the paint several times before 60 Elite decided to lift the press and shift into a 2:3 zone.

With 25.8 seconds left in the game, the score was 36-38, 60 Elite. Coach Kyle Duffy encouraged the team to foul to stop the clock. After several fouls, 60 Elite began shooting 1:1, missing one and making the other. With only seconds left to play, BMore’s finest was down three. A timeout was called by Coach Walker to devise a defensive strategy. The last play inbounded to Jalen Franklin who quickly passed to Lamonthe who shot a three point shot over the head of 60 Elite’s defense. Making the shot to put them into overtime at 42-42.

Overtime seemed to take a physical and mental toll on both teams, each struggled to get shots to fall. However, the steady hand of Walker and Lamonthe gave BMore’s Finest the edge over 60 Elite with a final score of 49-44. Both teams showed a great effort. Walker dominated the boards for BMore’s Finest pulling down four offensive rebounds during the second half. 60 Elite point guard Piorkowski nailed four threes in the second half. Floyd added six rebounds for 60 Elite and was the second leading scorer with 11 points. Piorkowski led 60 Elite with 14, Koch and forward Spencer Jordan each contributed 5 points.