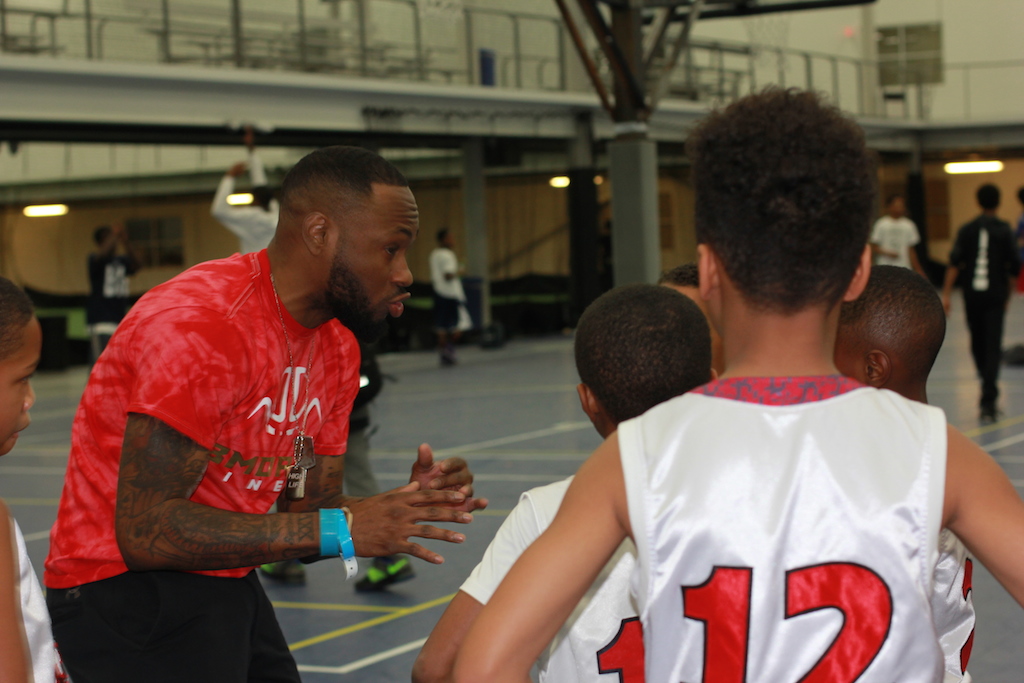 The 9U division of the AGame Super Shootout at the Spooky Nook Sports Complex in Manheim, PA was stacked with teams from all over the east coast. In the championship were Team Loaded from Virginia and BMore’s Finest from Baltimore. Team Loaded, took an initial lead in the game by playing a tough man-to-man defense. However, it wasn’t long before BMore’s guard Tyler Jackson #2 heated up and took his man off the dribble, converting on several buckets. His ball-handling skills were impressive for his age, allowing him to weave in and out of the defense with ease. Team Loaded had to switch to a zone defense to prevent the holes that were allowing Jackson to penetrate.

Once the zone was set up, Jackson started dishing the ball off to #35 Rodney Scott. Scott was a bigger kid and seemed to tower over the other players on the floor. His presence and size allowed him to convert on 10-points in the paint. Dayquan Davis was also a strong scorer for BMore’s Finest. He played the shooting guard position and scored 6 points from the perimeter and 4 through strong drives in the lane. Tyler “Tank” Boston #0 added a few points for the team, but his strongest contribution was sound passing and decision making from the point guard position.

Coach Nick Byrd for Team Loaded prepared and organized his team just as good as any. Unfortunately, they just could not get the shots to fall. #3 Trey Coles tried to make things happen by driving to the basket and drawing fouls. He made 4 points from driving the lane and 2 foul shots. #0 Danzielle Bullicott played a good inside game. #23 Jordan Clayton played shooting guard and had trouble getting into the inside against BMore’s speed and athleticism. In particular, Tyler Boston’s quick hands and fast feet prevented Coles from getting off in the inside.

The second half started off with Team Loaded’s Davis stealing the ball from Coles. He made a nice drive off of it. BMore’s Finest changed from a man defense to a zone, which seemed to help to cut down on perimeter shots and points in the paint. Loaded began to play lackluster and appeared to give up as the score was 32-11 with about 9:26 minutes left. J’lin Brown offered a fast footing and although he was not much of a scoring threat this game, he made a few defensive stops including, two steals toward the end of the game.

Loaded decided to press with several minutes left in the game. This resulted in 3 more points to put them at a final score of 42-15, B More’s Finest. The major challenges in the game were weak rebounding and the struggles converting for Team Loaded. Lead by esteemed Coach Donnell “Mookie” Dobbins, B More’s Finest played with the same discipline and poise from the beginning of the game to the end for the much deserved championship trophy.