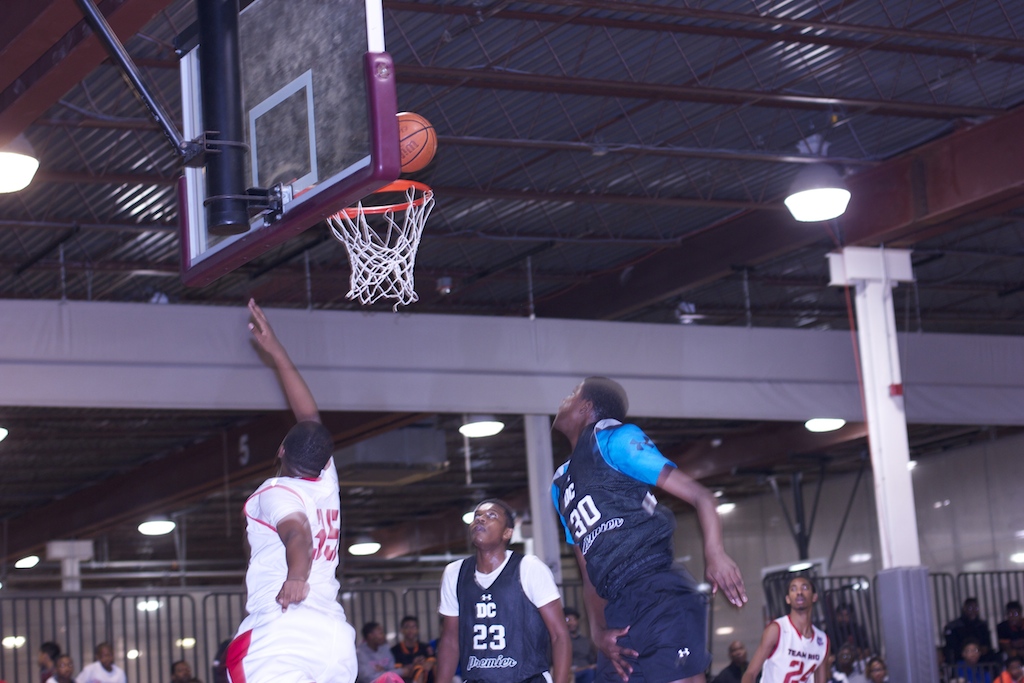 Team Rio of New Jersey and DC Premier battled through elite competition to make it to the 8th grade championship game at the AGame Super Shootout hosted by Havoc City.   Both teams went undefeated prior to the championship game. Team Rio won by an average of 17 points and DC premier by an average of 29 points. Both teams had everything you could want in a team; size, skill, patience and discipline. However, in the end the cards fell in favor of DC premier. Final score 56-63.

After a patient round of moving the ball, Team Rio’s Tariq Ingraham scored the first basket of the game. DC Premier’s Kenny Shiaff wanted to get things going, but fell short on a dunk. However, Malvin kept the intensity high with an all-net three-point shot from the left wing. Makhel Mitchell of DC Premier came up with a steal on the next play and found Shiaff who finished with a reverse layup.

Rio’s Bryan Antoine quiets DC fans when he net a three in the corner. DC patiently moved the ball shifting Rio’s zone defense. However, even after several offensive rebounds and looks at the basket, DC could not convert on the possession. On the last of thee attempts, Rio rebounded and scored a three in transition.

DC’s Shiaff got a steal and hit Makhi Mitchell for two points in the paint, but he missed the dunk. At the twelve minute mark, the score is a close 7-5, Rio lead.

After a few possession changes and field goals, Rio’s Terrance Williams assisted Antoine for a three in the corner. Malvin answered with a three-point shot, followed by a short jumper from just outside the box. On the next DC Premier possession, Malvin was fouled on his way to the basket. He made both free throws and scored again on a powerful put back in the paint.

On the other end, Ingraham bodied up DC premier in the paint for two points. Makahi Mitchell scored on a put back adding two for DC premier. Score 14-20, 8:05 remaining, DC premier up.

Two consecutive Rio turnovers gave DC opportunities at the basket. The last of which afforded DC’s Mahkel Mitchell an attempt in the paint off a pass from his twin brother Makhi. He got fouled and made both free throws. Score 15-23, DC Premier up with 5:20 left in the half.

When DC Premier rebounded a missed three-point shot from Rio, they declined the transition opportunity and took about 30 seconds off the clock before swinging the ball to Casey Mysell for a jumpshot from the right corner. Rio takes a time out.

After the time out and a pep talk from the coach, Rio’s Ahmadu Sarno drained a jump shot from deep. On the next DC possession, the team showed great discipline and patience taking over one minute off the clock before attempting their shot. However they could not score on the possession. A rebound sent Rio in transition. Antione settled for a three and missed the attempt. However, Rio scored on back to back steals from Jordan McKoy and Jabn Gaffney respectively.

With just over one minute left in the half, the score is 21-26 with DC still in the lead. Rio is determined to close the gap. Rio got a few defensive stops and made a couple of field goals. Antione’s steal and right handed dunk put Rio up one.

DC’s Makhel Mitchell tied the game when he made 1 of 2 free throws. Rio’s Williams was fouled on the floor with less than 4 seconds to go in the half. After the inbound, Antione pumped faked and scored an and-1 off a floater from the left baseline. He made the free throw. Score at the half is 30-27 Rio.

After the half, both teams were fired up and ready to seal the deal. Makhi Mitchell scored an and-1 off a rebound and put back. He made the free throw. Both teams exchanged baskets including a 3-point shot, and an off the dribble and-1 by Rio’s Gaffney as well as a put back by DC’s Malvin. Rio up 39-34.

Down 41-34 with less than 13 minutes left in the game, DC called a timeout. After the timeout, DC scored back to back. One of which was a steal and finish from Makhi Mitchell. Rio’s Gaffney was injured on the play. Fans clapped as he was helped off the court.

After back and forth attempts and changes in loose ball possessions, Christian drained a 3-point shot from the right corner for DC. Next, Makhi Mitchell used a quick first step to beat Rio to the basket and score two points.

On Rio’s possession, they were unable to score. Makhi Mitchell grabbed a strong rebound and hit Shiaff who powered the ball in the lane adding two points for DC Premier. Ingraham added a field goal in the lane for Rio.

DC and Rio exchange blocks, fouls and and-1s. The game remained close and both teams kept the intensity high.

Williams made two free throws, putting Rio up by one. While DC showed strong offensive rebounding, they could not score in the half-court set on the next possession. On the defensive end, a block shot and a quick outlet pass from Makhel Mitchell assisted Casey Mycesell to a tap-board layup. Rio’s Antione answered by scoring a field goal in the paint.

With 2 minutes and three seconds remaining in the game, DC Premier’s Christian was fouled on a three point shot and nailed all three free throws putting his team up two.

A Rio time out was called. After the time out, Rio could not score on the possession. A rebound and outlet by Makhell Mitchell assisted Malvin for an and-1basket. He made the free throw and put DC Premier up 5 with less than a minute in the game.

With 34.1 seconds remaining Rio’s Antione was fouled on an attempt and made both free throws. After the made basket, Rio applied a viscous full court press and fouled immediately to stop the clock. Malvin went to the line for a 1 and 1. He made the first and missed the second. The rebound sent Rio on a fast break. Looking to score quickly, Antione slashed full court, but did not make the left-handed layup.

Rio quickly fouled Makhi Mitchell after he gained possession of the rebound and sent him to the line. He made both free throws. Rio attempted another basket but it didn’t fall. They continued to foul hoping to stop the clock, but DC premier knocked down most of the free throw attempts, which put Rio in a deeper hole.

Sometimes games are lost on mistakes, size disadvantages or poor matchups. Other times, it’s just the luck of the draw. Not to discredit the skill level and sound coaching of both ball clubs, team Rio competed at a high level during this event, but the cards fell in DC Premier’s favor. Final score 56,63 DC Premier.

High scorers for Rio were Gaffney with 9 and Autoine with 18 points.  For DC Premier Malvin and Makhi Mitchell both had 14 points.  Makhi and Mekhel Mitchell added strong rebounding as well.