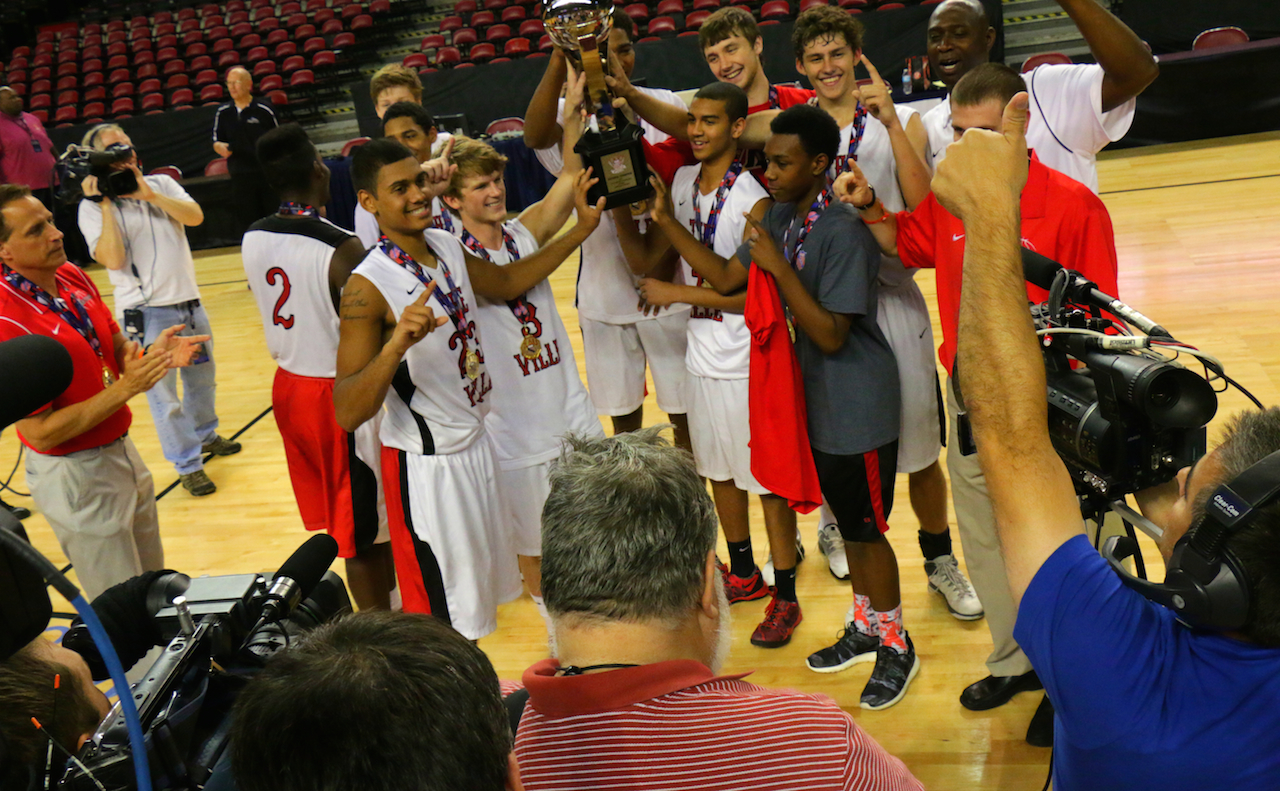 The 11th grade AAU National Championship game between Albany City Rocks and the Ville was top notch in every aspect.  From

beginning to end, each team played with heart, discipline and a drive to win. The hometown team, The Ville was off to a quick start and although the game was close throughout, The Ville maintained a lead and took home the AAU National Championship with the score of 46 to 40.

From the opening, it was clear the Ville’s Will Parker was going to play an integral role in the game.  On the Ville’s first offensive possession, they got the ball down low and powered up for an “and 1” opportunity.  Later, Ville’s Raymond Spalding was found open down low.  He caught an alley oop and excited the large home team crowd with his powerful dunk. The Rocks also had exciting scoring opportunities, but missed a wide-open dunk and layup in the first few minutes of the game. The first quarter closed with the Ville up 13 to 9.

Brandon Johnson pushed the Ville’s lead to 7 by hitting a deep three to start the second.  Johnson also converted on two additional three-point shots later in the quarter.  His scoring was lower in numbers than in other games in the tournament, but his shot selection in this game was key.  The timeliness of his field goals helped the Ville to their largest lead in the quarter. Johnson finished with 15 points and 6 rebounds.

The scoring slowed in beginning of the third quarter for both teams as the defensive intensity picked up. The Ville knocked down a few crucial field goals giving them an 11-point lead, 26 to 15.  The Rocks went on a 5-0 run, including an old fashioned three-point play to cut the lead back to single digits.  The Ville’s Spalding answered with a four-point run of his own.  He made a steal and went coast-to-coast for a dunk, putting the Ville back up by eight.  The Rocks held the ball for the last shot in the quarter. Sterling Taplin’s ankle breaking crossover caused Jax Levitch to fall at the top of the key.  Taplin stepped back and nailed the jumper as the buzzer sounded. The Rocks were back within six, 30 to 24.

With two minutes left in the final quarter, the Ville was up 38 to 33.  Raymond Spalding of the Ville asserted himself on the defensive end and blocked two shot attempts. On the second block, Elijah Burns came up with the loose ball and scored.   With under a minute left, the Rocks completed an “and 1” cutting The Ville’s lead to four.  On the issuing inbound play, The Ville turned the ball over. Burns drove to the basket and was fouled on his shot attempt. He hit both free throws with 49.6 left in the game.  It was a two-point game, 40 to 38.

The final seconds of the game was a free throw shooting contest led by Jax Levitch.  The Ville knocked down all their attempts at the

line and were victorious earning the National Championship against Albany City Rocks.  Final score, 46 to 40.

Raymond Spalding the four-star University of Louisville commit, “I love these guys, we have been a family since the fourth grade.”  Spalding plays on the Ville team with two of his high school teammates from Trinity High School in Louisville and believes this really gives them momentum entering the final high school season.  On plans for the rest of the summer, [I’m] going to, “get into the gym some more and get into the weight room.”

The Ville head coach David Levitch says, “It means a lot, we planned for this at the start of the AAU season.  From the beginning of April the guys have worked hard, we have played in some really tuff tournaments and when we knew the [AAU National] tournament was going to be here in Louisville, it was our goal for the end of the season.  Actually, the end of the AAU season for this age group finishes up this program… Winning the National Championship was huge for the team, but winning it in their hometown was even bigger… Winning it at home was very big for the family and friends who have been supporting us for years.”