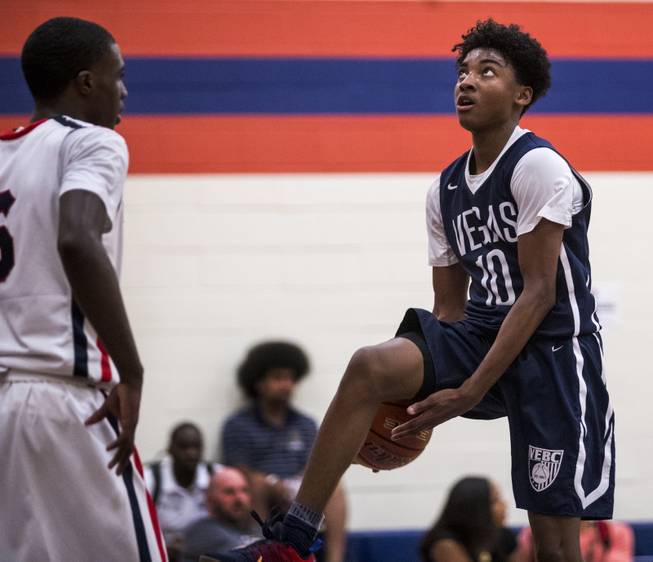 Zaon Collins walked into his first basketball practice with the Vegas Elite club program and coaches immediately sensed they had a special player. Collins, mind you, was just a fourth-grader.

But this pass-first point guard instantly made them a better team.

“The first day he came in, we knew he was special,” said Brian Sitter, the club’s longtime coach and director. “It was his focus, the level of intensity and the way he competed. He immediately took his first team to another level with the way he competed.”

The 6-foot Collins has continued to progress.

Despite being a few weeks away from starting high school at Bishop Gorman, Collins already has scholarship offers from Southern Miss and TCU. He joins other notables from Las Vegas — Shabazz Muhammad, Stephen Zimmerman and Troy Brown Jr. — who have had scholarship offers prior to attending a day of high school.

Some consider offers at this stage of the recruitment process more of a college showing significant interest in a player, knowing things frequently change — coaching staffs and a kids’ development — in four years before a prospect can officially sign an intent letter. Just don’t expect Collins to get complacent knowing a spot in college is waiting for him.

“The (attention) has made me more hungry,” Collins said. “You can always get better every day. I’m working hard to get better.”

Late in the first half of Vegas Elite’s opening game in the Fab 48 on Wednesday, Collins flashed signs of what evaluators say make him a special player.

Noah Taitz, another Gorman product, stole the ball in the backcourt and passed to Collins. Collins aggressively pushed the ball up the court in transition, throwing a cross-court pass to a wide-open Will McClendon. McClendon buried the uncontested 3-pointer, helping Vegas Elite grow its lead to more than 20 points.

“He doesn’t have to score 40 or 30 points a game for people to notice him,” Sitter said of Collins. “He’s the best player on the court by scoring eight points with 12 assists. He has an ability to find the holes in the defense. He finds his guys, creates offense for his teammates. It’s a skill and he’s amazing at it.”

The game against the Arkansas Wings was billed as a matchup of two of the best 15U club teams in the nation. Vegas Elite led by double digits for most of the game and won by nearly 30 points. McClendon was offered a scholarship by Pepperdine after the game, while Taitz and center Isaiah Cottrell — part of Gorman’s state championship team last season — already have numerous major-conference offers.

Collins, depending on the day, isn’t the No. 1 option in the offense. And that’s just fine. He gets more satisfaction out of setting up a player for points than scoring himself.

“I like to pass first and make plays for my teammates,” Collins said. “I don’t care about points and scoring. I like getting assists and playing defense.”

NCAA rules prohibit coaches from directly recruiting prospects when they are incoming ninth-graders. Rather, all the recruiting goes through coaches, meaning Sitter and coach Rich Thornton have fielded plenty of phone calls. When a player is offered a scholarship, they are the ones who get to deliver the news.

“That’s a special thing,” said Sitter, who works with more than 350 kids in Vegas Elite. “(Collins) is one of my favorite kids who have come through the program. He bought in to allowing us to teach and coach him.”