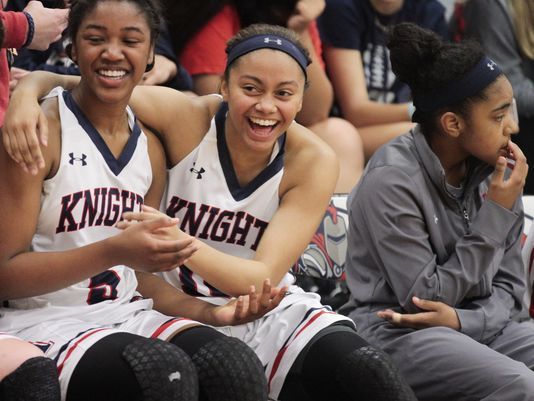 First, she powered the Lady Knights to the first state championship in school history with a transcendent performance in the two games of the Division IV state tournament in Hammond.

Then, she made the Adidas Team USA basketball team – who she is currently playing with in Italy – the only Louisiana player selected to the team.

And now, the four-star prospect has committed to the University of Alabama in the summer before her senior season.

I’m very happy and excited to announce that I am committing to the University of Alabama! RollTide❤ pic.twitter.com/30MJ3ir0aS

Abrams, a standout in the classroom as well, said the decision was the hardest she has ever had to make.

“You have to take different things into account,” Abrams said from Italy. “Alabama, they just had something. They say sometimes when you are looking for something you just feel it in your heart.

“I had visited Alabama before and I just think it’s the best fit for me.”

Abrams said she was looking forward to playing in the Southeastern Conference, one of the most competitive conferences in the nation.

“It’s where I wanted to be. It’s one of the toughest conferences to play in,” Abrams said. “Me being the competitive person that I am, I wanted to be competing against the best.”

Abrams said with the commitment to her future off of her shoulders she was looking forward to going through the AAU season and having some fun while improving her game.

As for the high school season?  Abrams said now that she has tasted a state title, getting one more wouldn’t be so bad.

“I definitely know what it feels like now to have the state championship,” Abrams said. “So I want to go back (to the tournament).”

While preparing for her freshman season at Alabama Abrams said she would continue to work on her strength and shooting to prepare herself for the college game.

“I just want to continue trying to become the best player that I can be,” Abrams said. “I want to improve my jump shots off the dribble and finishing around the basket – but that will get better as I continue to workout and get stronger.

“I just want to keep practicing and make sure I’m going into my freshman season as prepared as possible.”