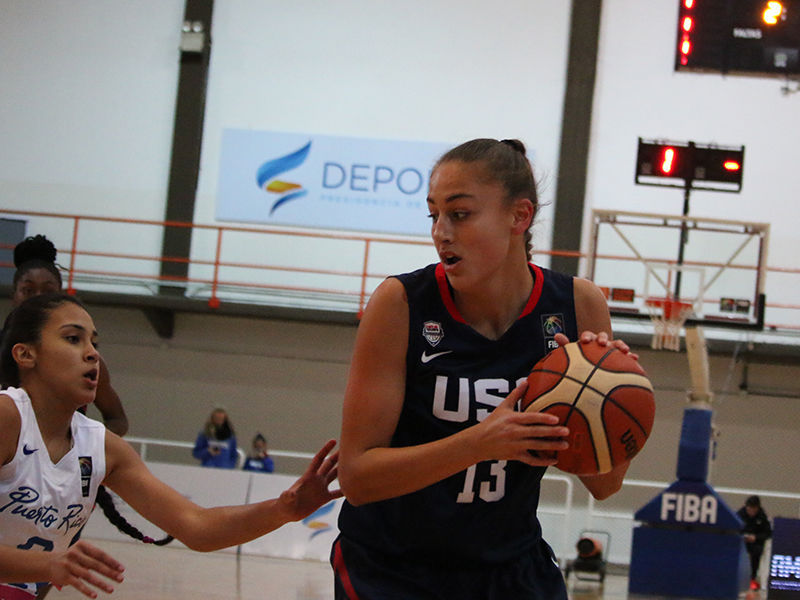 Kylee Watson spent a week in Argentina and is coming back to Linwood, NJ with a gold medal.

Watson had one point, one assist, one rebound and blocked a shot Sunday night for the Women’s Under-16 National Team in its 91-46 victory over Canada in the title game at the FIBA Americas U16 Championships in Buenos Aires.

In her 12 minutes, 9 seconds of playing time, the U.S. outscored Canada by 15 points.

The U.S. team went 5-0, playing and winning on each day of the tournament.

Watson, 15, is a Mainland Regional freshman who was chosen for the national team after being invited to tryouts in Colorado Springs, Colorado, last month. More than 130 other girls participated in the tryouts.

And her travels are not over. The top four teams from the eight-team tournament in Buenos Aries advance to the 2018 FIBA U17 World Cup.

One other New Jersey girl is on the 12-player national team: Diamond Miller, of Franklin High School in Somerset County.

Upon learning last week she had earned a spot on the national team, Watson said she was initially composed but then could barely contain her excitement.

“I didn’t really know how to react to (the news),” Kylee said. “I was so ecstatic and excited, but didn’t want to make a big scene.”

Watson already is drawing attention from NCAA Division I basketball programs and has gone on unofficial visits. As a freshman with the Mustangs in the 2016-17 scholastic season, Watson averaged 16.4 points, nine rebounds and 2.3 blocks.

Before leaving for Argentina, Watson said she was looking forward to playing against some of the best players in the world.

“I’m trying to take it all in and take advantage of all my opportunities outside of the court,” Watson said. “I’m hanging out with new friends and just getting to know people from across the country. It’s an amazing experience.”

Staff Writer of pressofatlanticcity.com John Russo contributed to this report.