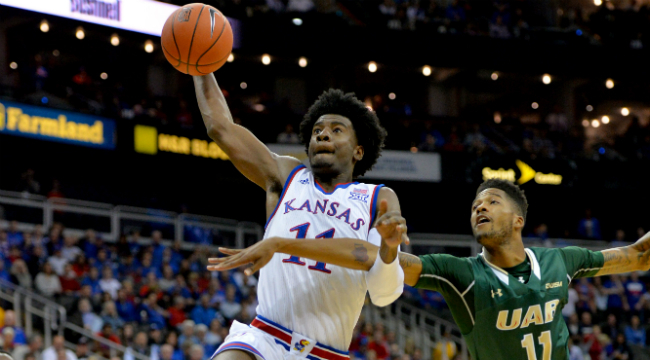 Josh Jackson will find out where he will begin his NBA career on Thursday night in New York at the draft, but the projected Top 5 pick has already inked his first shoe deal with Under Armour, as announced on Wednesday night.

Jackson becomes the first major draft prospect to sign on with Under Armour since Emmanuel Mudiay in 2015. Under Armour’s most famous sponsored hooper is Steph Curry, but the only other significant basketball signees they boast on their official athlete roster are Brandon Jennings and Greivis Vasquez.

Mudiay has yet to pan out to the potential many felt the fifth overall selection from 2015 had, so if Jackson becomes the star some feel he can be then he might be able to get the second ever Under Armour signature shoe. There’s no details on the signing as of now, but we can expect Jackson to be wearing the Curry 4s that Steph debuted in the NBA Finals when his NBA career begins.

With Jackson signed to Under Armour, it’s possible that the first three selections in the NBA Draft are all inked to sponsorship deals. Presumptive top overall pick Markelle Fultz signed with Nike recently, while Lonzo Ball famously went the independent route with the $495 Big Baller Brand ZO2 Prime.