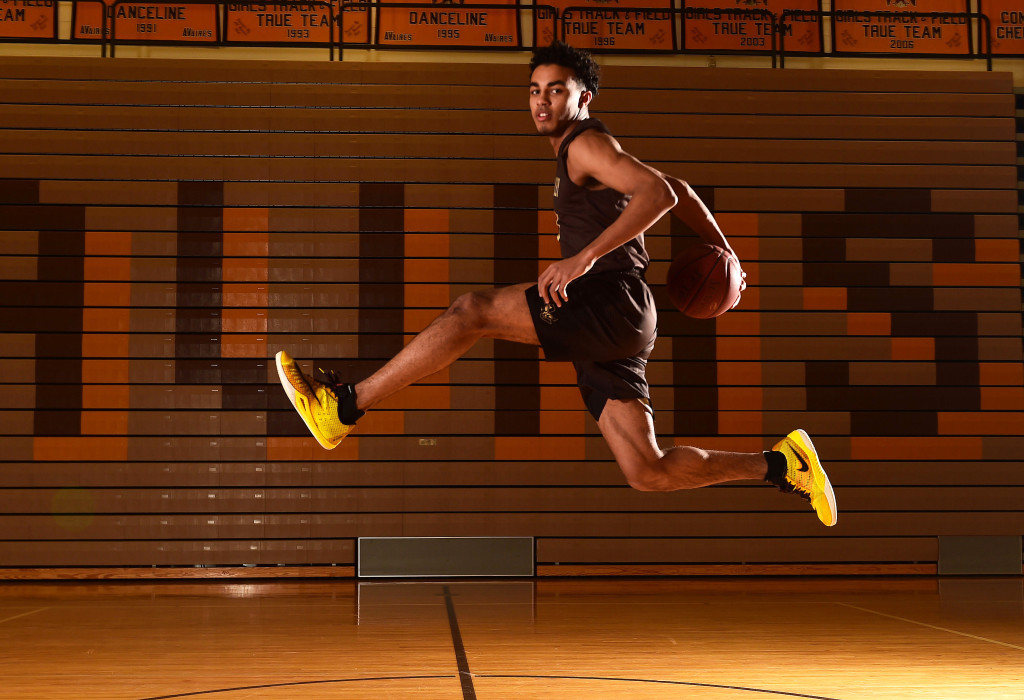 Howard Pulley 17U basketball coach Antwan Harris doesn’t pay much attention to opposing teams, who their players are and where they’re ranked as college prospects.

Jones relishes the chance to take on every highly-ranked point guard recruit on Nike’s EYBL circuit.

In a May match-up against Javonte Smart, the 27th-ranked player in the Class of 2018 by ESPN, Jones finished with 31 points, 17 assists and seven rebounds. Smart had 12 points, two assists and two rebounds.

“Any time there was a kid that was either on his heels or people would make references that they may be better than him, he would turn around and give me a triple-double,” Harris said. “And after the game he’d say, ‘Yeah, coach, they had him ranked ahead of me,’ and we would laugh about it.”

Those performances have paid dividends.

A five-star recruit with offers from the likes of Duke, UCLA, Arizona and the Gophers, Jones is a top-20 player in his class according to ESPN, Scout, 247 Sports and Rivals. The latter three outlets have Jones ranked as the top point guard in the country.

Those same outlets weren’t exactly gushing over Minnesota’s best high school basketball player before this AAU season. At the start of the year, ESPN ranked the top 60 players in the Class of 2018 and Jones wasn’t listed. Keep in mind, Timberwolves point guard Tyus Jones, Tre’s older brother, was always a top-five recruit.

“Nobody has seen (Tre) in the same light,” said Rene Pulley, the founder and owner of Howard Pulley.

Jones would rather not look at recruiting rankings but said they’re impossible to ignore.

“It’s right there in your face, always, and people are always reminding you about it,” he said. “So, I did see and I did pay attention to it, and it motivated me, for sure.”

Being underrated and undervalued is nothing new to Jones, who had to claw his way out of his older brother’s shadow and sacrifice statistically for years while playing alongside a sensational scorer like Gary Trent Jr.

“He had just kind of been overlooked the majority of his basketball career up to this point,” Tyus said.

That ended last season when Trent transferred to a prep school in California for his senior year, giving Jones the reins to lead Apple Valley. Jones responded, leading the Eagles to the Class 4A state championship. He averaged 25.6 points, 14.3 rebounds and six assists over a four-day, three-game span as he guided Apple Valley through perhaps the deepest Class 4A tournament in history.

That’s nice and all, but to move the national needle, Jones needed to deliver during the AAU season, where he was on the national stage against the best players in the country.

Harris said Jones was Howard Pulley’s anchor last year, starring defensively while serving as a distributor to get Trent Jr. and Brad Davison in good scoring positions. Paul Biancardi, ESPN’s national director of recruiting said Jones was “a very good player” who was “in and out” of ESPN’s top 60.

Pulley tried to tell everyone last year that his team would again be good this spring because he had a “helluva point guard.” Most didn’t believe him. But Biancardi saw a different player this spring. Jones averaged 20.4 points, 7.3 assists and five rebounds for Howard Pulley.

“Every time I got a chance to prove myself, I needed to do that,” Jones said. “No matter if it was a smaller game or our biggest games, I just had to try to play to the best of my ability.”

Jones was named first-team All-EYBL and the Offensive Player of the Year by D1 Circuit.

“I saw a more assertive offensive player, I saw a much more productive offensive player,” said Biancardi, who called Jones a complete point guard. “He certainly looks bigger and stronger physically, but you could just tell that he really worked on his skill, skill of scoring, and his decision-making was great and he lifted up his team. You combine all those three things … he made a huge impression on me.”

To Tyus, Tre’s improvement was no surprise.

“I’m in the gym with him almost every day, so I see the amount of time he puts in, the amount of hours he spends in the gym and how motivated and dedicated he is to working and becoming the best player he can be,” Tyus said.

Biancardi recently asked Jones what a summer day looks like for him. At 8 a.m., Jones lifts weights before moving on to agility drills. In the afternoon, he works on skills, his shooting and does 1-on-1 work. In the evening, Jones is playing basketball, in the Twin Cities Pro-Am or some other pick-up game.

“Of all the great players I’ve ever coached, that was their day,” said Biancardi, a former college coach who worked with the likes of Michael Redd and Howard Eisley. “He’s not the type that has to prove himself, in my opinion. He’s the type of guy that just keeps improving himself. … And that’s what makes him special.”

How good is Jones now? Scout ranks Jones the seventh-best player in the country. ESPN has him slotted 19th, and still fourth among point guards, though Biancardi said those rankings are fluid.

Harris said Jones is a top-five player in the country, and if Pulley has to pick a point guard to lead his team, he’s going with Jones.

“I’m trying to stay humble as much as I can, but I feel like I’m the top point guard in the nation,” Jones said. “I feel like what I was able to do with our team this year is something that no one really thought we would be able to do.

“And then the numbers that I put up just speak for themselves.”