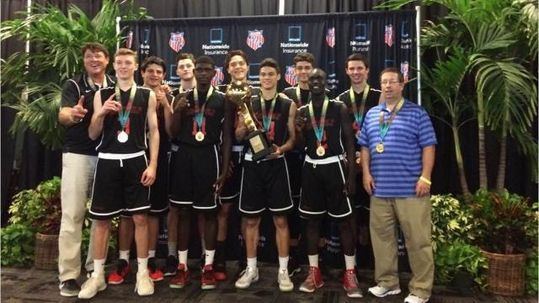 A national championship one day, a trip to Magic Kingdom the next.

The excursion to Disney, though, was part of team’s itinerary. Coming home to Vermont with a crown was the pleasant surprise.

“I’m sure it’s something our kids are never going to forget,” said Booth, who will enter his 25th season at the helm of the Norwich University men’s basketball program this winter. “To be honest, this was really unexpected. We went down there to compete and the next thing we know, we are playing Sunday for the national title on (ESPN3).

“I’m so happy for the kids. This has been a great experience.”

Joey Stahl and Dylan Trombley, standouts from Moriah (N.Y.), were also an integral part of the squad.

“It is Division II, but it’s still really good competition and it’s quite the achievement to end up winning it all,” Lafley said. “Those coaches have done a tremendous job and have been so invested with those kids. As the director of the program, I could not be prouder of what those kids and coaches have accomplished.”

In the final, Booth said Lone Wolf played unselfishly in a wire-to-wire triumph.

“The kids did a wonderful job defending and moving the basketball, and they never allowed them to get into a rhythm,” Booth said. “We are team built on our defense and they did an exceptional job all week. It was really a group effort.”