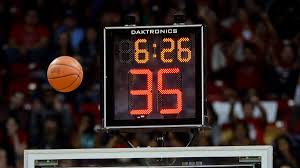 To avoid teams holding the ball at the end of quarters and improving the flow and speed of the game, The Wisconsin Interscholastic Athletic Association (WIAA) joined New York, Rhode Island, Massachusetts, Maryland, Washington, California, North Dakota, South Dakota, and Milwaukee in implementing a 35-second shot clock for varsity games beginning with the 2019-’20 season.

Public Schools administrator Eric Coleman, a former basketball coach, was one of the board members who supported the shot clock’s adoption.

The recommendation initially pushed for implementation this coming season. However, use of shot clocks beginning in 2019-2020 season would give schools more time to purchase equipment costing an estimated $2,000 to $2,400. In addition, schools would need to hire and train additional staff to operate the clocks and updated scoreboards.