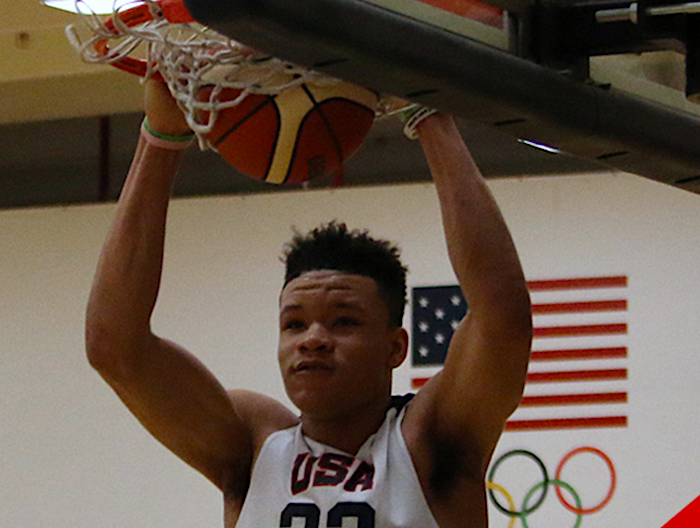 Knox made the first-round of cuts tat narrowed the roster from 28 to 18 in Colorado Springs, Colorado. The final cut is expected to be made Thursday ahead of the NBA Draft.

“He’s going to fine with some rest, but he and I talked and both thought it was his best interest not to push it,” Calipari tweeted Wednesday. “He’s too important to our season to push it and aggravate it more. My suggestion was that he go back to Lexington to rest and focus on class, which he is. He was great this week. Proud of him.”

Kevin Knox tweaked his hamstring during Team USA Tryouts and withdrew from camp to return to Lexington and recuperate for the upcoming season. (Photo by Team USA)

Knox, a five-star incoming freshman from Tampa, Florida, was ranked the No. 9 player in the Class of 2017 and averaged 28.9 points and 11.3 rebounds per game last season. Knox, Florida’s Mr. Basketball, led Tampa Catholic to the state championship game.

Hamidou Diallo and P.J. Washington are two remaining UK players in the camp competing for a spot on the 12-man roster. The FIBA World Cup is set for July 1-9 in Cairo, Egypt.

Calipari said coaching the team is his way of giving back to basketball.

“It’s a chance for me to get back and have a chance to do some stuff, I’m excited to work out with some players and that aren’t just my own guys and give something to some of these kids before they go on to college and a few of them back to high school,” he said earlier this month. “I just want to enjoy it and have fun with it.”

Calipari said the main goal is to have fun and make it an enjoyable experience.

“We will try to make to make it simple for them, get them to play hard and I’m excited about it,” he said.

The final roster is slated to be unveiled Thursday, the same day as the NBA Draft and event Calipari said he doesn’t want to miss.

“My plan is to be at the draft,” Calipari said.