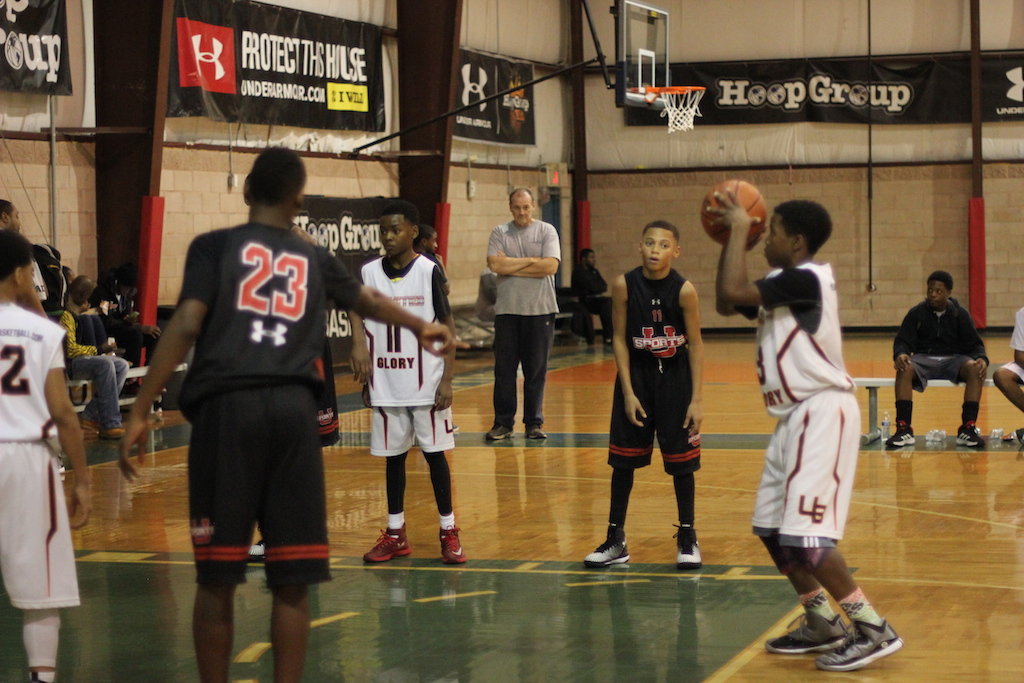 On Sunday, Unlimited Glory brought home the 6th grade championship against Team Izod at the Basketball Spotlight Tipoff Classic in Neptune, New Jersey. It was a nail biting game, which came down to two free throws following the final buzzer. Glory’s Zion Harmon was fouled as the final buzzer went off and was given two free throws. Glory needed both free throws to win the game, as the score was 47-46 with Team Izod ahead. Harmon, who was clutch the entire game, once again came through and converted both free throws to push Glory to a 48-47 win over Team Izod. The team was lead by Harmon’s 29-point performance.

Right off the bat, the teams played fairly evenly and exchanged leads many times, despite Glory being outsized by Team Izod. Harmon dominated the floor right away, sinking two free throws after being fouled on a feed from teammate Barry Evans. Team Izod took a quick 6-5 lead after Tristan Jeffries sank two free throws followed by two more free throws from Justice Williams.

A baseline layup from Glory’s Stalin Oaks put the team on top again, but it was short-lived. Jefferies made two free throws followed by a layup to put Team Izod up 10-7 with 7:27 left in the first half, one of the biggest leads of the game. The teams continued to exchange points and the lead as the remaining time in the first half dwindled.  With 40 seconds left, Harmon drained a pull-up three to give Glory a 23-20 lead at half time.

The second half proved to be much of the same for the two teams. Both teams played solid defense and made the most of their opportunities on offense keeping the score close down to the wire.

Team Izod scored five straight points opening up the second half and took a 25-23 lead. Jefferies scored on back-to-back layups before Trey Patterson added a free throw. Glory’s George Cutler was fouled on a three-point attempt and converted all three free throws to take a 26-25 lead with just under 10 minutes left to play in the game.

Team Izod’s Jeffries sank two free throws to earn the lead back before Glory’s Keon Henderson connected on a three-point shot from the corner. Team Izod’s Darnell Harris scored on a layup before Justice Williams added a short jumper to give Izod a small 31-29 lead.

Harmon drained a three from the wing to give Glory another lead.  But the lead was quickly taken back by Team Izod when Jefferies, who ended the game with a team-high 18 points scored on a layup before being fouled and converting both free throws to give Izod a 35-32 lead with just over six minutes left in the game.

With just over 3 minutes remaining, Harris converted on a layup, which gave Izod their biggest lead of the game, 43-38. Harmon drained two, three pointers in a row from the top of the key changing the lead again in Glory’s favor, 44-43. The back and forth action and lead changes continued until the final buzzer.  Harmon was fouled on an attempt at the basket just before the final buzzer sounded.  His two free throws after the buzzer captured the win for Glory.

In an interview post game, Coach Mike Harmon of UNLIMITED Glory stated “I’ll take the prosecution for the prize.”